The Tower of Druaga

Some may call "Tower of Druaga" an Action-RPG, I call it a clever maze game with usable extra items. Your goal on each floor is to find the exit. Besides that you have to find a treasure chest on each level, which often gives you a bonus item, which might become invaluable in later levels. Here is also my biggest complaint about this game. Besides the repetitive nature of such maze games the appearance of treasure chests is often triggered by certain events like killing a special enemy on the floor. Missing treasure chests on the first floots might make a much later floor nearly unplayable, which is a bit unfair system. Graphically the game is average. Since it is an early Famicom game the mazes don't come in many shapes and looks.

port of
The Tower of Druaga (Arcade)

sequel of
Kai no Bouken: The Quest of Ki (NES) 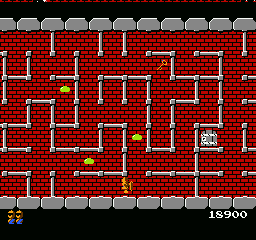 The Tower of Druaga in-game screen.