From time to time I get surprised by games, something that Konami Wai Wai World achieves. I did not expect a strange crossover platform/action title starring a dozen or so of Konami's heroes. The main protagonists are Konami-Man and Konami-Girl who try to rescue kidnapped Konami heroes from their respective levels. And there you have them all. Castlevania, The Goonies, Getsu Fuumaden, Goemon and even a classic vertical scrolling shooting level very similar to Twinbee and Life Force. Once you rescue one of the other Konami heroes you can switch to them whenever you want and use their special abilities which are sometimes needed in order to rescue the next hero. Otherwise the six starting levels can be finished in any order you want. Graphics are fine with lots of different stages and enemies and the music resembles the classic tunes of the other games which is a good idea. The bad part of the game is the gameplay itself, which is only slightly above average with some very difficult moments. Walking down stairs, and hitting enemies proved to be more annoying than I hoped. 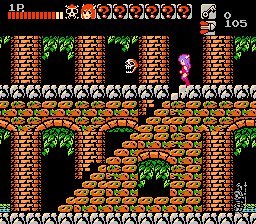