Earth, 2019: On a remote island, an US science team makes a frightening discovery. The North Korean Government quickly seals off the island chain. Contact with the science team is lost. The United States responds by dispatching an elite team of Delta Force Operators to recon the situation and report back to the Pentagon. Amid rising tensions between the US and North Koreans, a massive, 2km high alien ship is revealed in the middle of the island. The ship generates an immense force sphere, freezing a vast portion of the island and drastically altering the global weather system.

The newly formed alliance fights epic battles against the marauding Aliens. With hope rapidly fading, the player must fight through lush tropical jungle, harsh frozen landscapes, and finally into the heart of the alien ship itself for the ultimate Zero G encounter with the aliens.

* An immersive story that puts you the player in the pivotal role to repel an alien invasion and save mankind.
* A unique three-act structure that forces the player to use real-time armor and weapons customization to adapt to an ever changing dynamic world.
* Encounter a compelling, frightening and totally original alien species that uses its senses intelligently and work in combination with each other to present players with the most challenging opponents yet in an FPS.
* Enemy and ally AI utilize real-world military tactics.
* Take control of a wide variety of land, sea and air vehicles including trucks, tanks, boats and helicopters.
* Explore a living, dynamic world where earthquakes, breaking ice, landslides, and tornados pose a real and an ever-present danger.
* 32-player Multiplayer with real-time armor and weapons customization and an all new mode that combines player modification and tactical objectives.
* Emergent gameplay; actions taken in the game affect future outcomes giving each player a unique experience.
* Highly robust and easy to use mod toolset allow players to create their own expansive levels with game modes for both multiplayer and single player.
* The most realistic environments, spectacular special effects, physics game engine, lighting system and enemy Al through CryENGINE 2.

Global tensions have reached boiling point as the U.S. and North Korea square off in the South China Sea. At stake: a mysterious artifact uncovered by a team of U.S. archeologists.

The North Korean government quickly seizes the area, prompting the U.S. to dispatch an elite team of Delta Force operatives on a rescue mission. During the siege the true nature of the artifact quickly emerges, pointing to the existence of an alien presence on Earth, and ultimately the trigger for a massive-scale alien invasion.

The battle to save Earth begins as the aliens' flash freeze the tropics into a ghostly-white frozen landscape.

As gamers take up arms against the aliens, they will be outfitted with customisable weapons and a high tech nano-suit, allowing them to adapt their tactics and abilities to a hostile, ever-changing environment and a mysterious enemy.

Powered by CryENGINE 2 , Crysis delivers the ultimate DX10 gaming experience for the PC, including unparalleled graphics, special effects and artificial intelligence. The game is also scaleable to deliver a breath-taking FPS experience for older DX9 PCs.

• Adapt to Survive - An epic story thrusts players into an ever-changing environment, forcing them to adapt their tactics and approach to conquer battlefields ranging from newly frozen jungle to zero-gravity alien environments.
• Suit Up - A high-tech nano-suit allows gamers to augment their abilities in real time on the battlefield. Players can choose to enhance their speed, strength, armor and cloaking abilities to approach situations in creative tactical ways.
• Customisable Weaponry - A huge arsenal of modular weaponry gives gamers unprecedented control over their play style. Blow the opposition away with experimental weapons like the TAC launcher, discover alien technology and utlise custom ammunition from incendiary-tipped rounds to tactical munitions that can silently put foes to sleep.
• Veni Vidi Vici - Lifelike enemy AI challenges players to assess a situation and approach it strategically. It isn't about having the fastest trigger finger – players are challenged to be proactive in the fight, not reactive.
• Zero-G Gameplay - Battle a horrifying alien species in a true Zero-gravity environment, where physics change everything as players must adapt to moving in Zero-G and contending with the recoil from their weapons and more.
• Next-Generation Graphics - Built from the ground up using Crytek's proprietary CryENGINE 2 , Crysis' visuals define "state of the art," with full DX10 support and scalable options to deliver solid performance on older machines.
• Open, Physicalised World - Choose your own path through the open world of Crysis, destroying obstacles, driving vehicles from VTOL's to boats and using the environment itself against your enemies.
• Bring It Online - Full-featured multiplayer for up to 32 players with real-time armor and weapons customisation. For a pure adrenaline fix hit the Instant Action button, or prepare yourself for the all-new multiplayer PowerStruggle mode that combines economy and vehicle warfare, alien technology and ranking, all wrapped in a strategic objective-based experience. 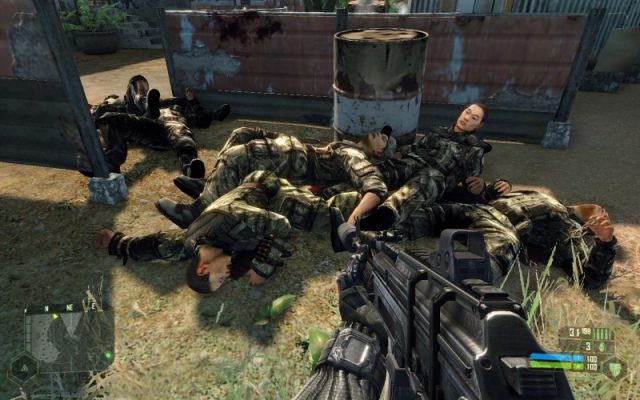 So much for the A.I.