Popeye no Eigo Asobi is a simple word guessing game aiming at Japanese kids to improve their English skills. The graphics feel like being directly taken from the earlier released Famicom arcade port Popeye. You can choose words from several categories like "countries" or "sports". Gameplay of Game Mode A and B follow Hangman-rules. Selecting ten wrong letters from the searched word results in Baby Sweetpea falling down. In Game Mode C you have to catch English letters in the right order to build the English translation of the given Japanese words. All in all a simple game aimed at kids, which is well playable, but also really uninteresting.

Popeye no Eigo Asobi is the Japanese-exclusive spin-off to the Popeye arcade game.

The game includes three modes: Word Puzzle A, Word Puzzle B, and Word Catcher. In Word Puzzle A (based on the first level of the original game), the player is given the Japanese term for a word in one of six categories: Animal, Country, Food, Sports, Science, and Others. Blank squares for the English word are given, and the player must maneuver Popeye around to point to letters of the alphabet in order to fill in the blanks. Each wrong letter entry prompts Brutus/Bluto to punch a basket carrying Swee'Pea; the player must solve the puzzle before Swee'Pea's basket is knocked off the platform it is attached to. The player may also forfeit the puzzle by punching the "?" icon. If the puzzle is lost or forfeited, the correct English word will be displayed. Word Puzzle B is identical to the "A" mode; however, the player is not given the Japanese term beforehand. In the two-player Word Catcher mode (based on the third level of the original game), the first player controls Popeye and the second controls Bluto. Three Japanese words are displayed on the screen's left side, and both players compete to collect letters thrown by Olive Oyl to spell out their English equivalents. A player wins when he or she has correctly spelled five words.
(Source: Wikipedia) 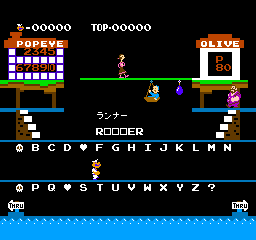