The first Star Wars game for the NES never made it outside Japan. You control Luke Skywalker light-saber swinging through tpyical platform levels on different locations/planets (very) loosely following the plot of the first movie. Between the platform levels you have some space flight shoot'em up action in first-person view, similar from what the old Star Wars arcade game showed us. The last level is a top-down shoot and avoid everything part in the trench of the Death Star. The game has quite diverse levels and sub-sections and nice graphics. But it is very very hard. You have several lives and you can use the force for some bonus abilities but you don't have a life meter. One wrong move, one wrong jump and you lose a life. And the environments and enemies are unforgiving. A typical game where save states are a must to enjoy (and finish) the game. But at least it is worth it afterwards.

Another odd North American movie game not released outside of Japan. 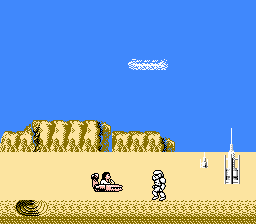