Ico incorporates elements from puzzle, adventure, strategy, fighting, and role-playing-game genres. It's the tale of a courageous young boy on a heroic journey through an unknown castle to save a princess and discover his own mysterious fate. Faced with numerous puzzles, ranging from simple mazes to complex brainteasers, Ico invites gamers into a deep, mysterious story line with beautiful, dreamlike graphics. As the story goes, a boy is born once every generation with horns. Thought to be the minion of an evil spirit, the innocent Ico was captured at age 12 by the village's leaders and brought to a deserted castle to be sacrificed for the good of the community. After the villagers bury him alive in a castle tomb and leave him for dead, he is able to break free of his confines. He then learns of a beautiful young princess who is likewise held captive. From there he embarks on a challenging course through the castle ruins to save her.

# 2013-09-17 17:02:49 - official description
Ico is the story of a young boy who - born with an abnormality which makes him grow horns - is destined to die, to ward off the 'evil eye' that his horns represent. Any misfortune that befalls his village is attributed to Ico, and when the boy turns 12, the villagers decide the time has come to erase his existence before more calamities befall them.

Ico is taken away to a secluded cliff-side on which lies a dank, dark and disturbing ancient fortress. Those that place Ico here intend to leave him to starve or freeze to death within these ruinous walls - only then will his curse be lifted from their village. The fortress is uninhabited, they believe, and if any life should exist there, it will be in the form of malign spirits who will surely scare the boy to death if the cold and hunger don't get to him first.

But Ico is not alone. In his feverish, dreamy state, the vision of a ghostly female appears before Ico. And when he breaks free from his tomb, Ico learns that this was no dream or trick of the mind - the girl is flesh and blood, and is hanging above him like a delicate, celestial caged bird. As much as Ico needs her help, he soon realises this mysterious girl needs his help, too.

So begins a journey in which you, playing as Ico, support Yorda as you look for an escape route. For Yorda, this means freedom from an evil mother who intends to keep her imprisoned in the fortress forever more. For both of you, this means sealing the ultimate pact of friendship - without each other's help, Yorda is doomed to be shackled down by shadowy spirits that lurk in the darkness and you are destined to fulfil your tragic fate. But together, you can overcome evil. Where Yorda is weak, you can be strong. When you don't know where to look, Yorda can point to the light. With each other's encouragement, you can both wake up from your nightmares.

sequel of
Shadow of the Colossus (PS2)

was remade as
The ICO & Shadow of the Colossus Collection (PS3) 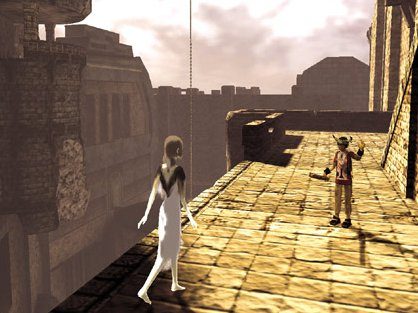