The Witcher represents the pinnacle of storytelling in role-playing games, shattering the line between good and evil with a world where moral ambiguity reigns. In a beautiful, rich game universe created by artists first, technology second, the player becomes his own hero in an epic, action-packed narrative uniquely defined by his actions. Returning to the roots of the role-playing genre with a fresh and modern approach, The Witcher emphasizes story and character development in a vibrant world, while incorporating tactically-deep real-time combat like no game before it.

Immersed in a vivid but harsh fantasy world, the player assumes the role of a white-haired witcher named Geralt, a renowned monster-slayer-for-hire and master swordsman with superhuman strength and reflexes. While trying to regain his lost memory, Geralt unwillingly becomes involved in a world-shaking power struggle. Created to provide entertainment for both fans of role-playing games and those seeking fast-paced action, The Witcher brings together epic storytelling and dynamic, visually stunning, and tactically deep action.

* Geralt of Rivia: a one-of-a-kind protagonist
* A charismatic and unique character, Geralt is a mutant swordmaster and professional monster slayer.
* Choose from over 250 special abilities correlated to attributes, combat skills and magical powers to build the character in a way best suited to tactical needs and style of play.
* Original fantasy world drawn from literature
* Inspired by the writings of renowned Polish author Andrzej Sapkowski.
* Featuring adult themes, less fairy-tale than typical fantasy, with mature social issues like racism, political intrigue and genocide.
* It is a harsh world where nothing is black or white, right or wrong, often forcing players to choose between the lesser of two evils to advance.
* Non-linear and captivating storyline
* Full of turns, twists and ambiguous moral decisions which have real impact on the storyline.
* All quests can be accomplished in several ways and the game has three different endings depending on the player's actions and choices throughout the adventure.
* Visually stunning tactical action
* Engage in complex yet intuitive real-time combat based on real medieval sword-fighting techniques.
* Motion capture performed by medieval fighting experts at Frankfurt's renowned Metric Minds studio, resulting in 600 spectacular and authentic in-game combat animations.
* Six combat styles, dozens of potions, complex alchemy system, modifiable weapons and powerful magic add tactical depth to the fluid real-time experience.

„The Witcher" returns to the tradition of the role-playing genre with a fresh and modern approach, emphasizing story and character development in a vibrant world, while incorporating spectacular and well developed combat system like no game before it. The story is set in the world described in five books - giving additional credibility and depth of the background of the story.

The game features the player as a „Witcher", a warrior who has been trained to fight since childhood, subjected to mutations and trials that transformed him. He earns his living killing monsters and is a member of a brotherhood founded long ago to protect people from werewolves, the undead, and a host of other beasts.

Our vision of the game can be described as: A modern story-driven RPG with unique hero, stunning visuals and easy-to-use, yet complex combat system. Perfect both for fans of storytelling and admirers of vigorous action.

Deep and intriguing storyline
* Interesting story full of twists and turns in a complex and coherent setting.
* Most quests can be accomplished in several ways.
* Three different endings that depend on player's actions and choices throughout the whole adventure.

Original character concept and fantasy world
* The main character is a professional swordmaster and monster slayer.
* Game world which is more „adult" and less „fairy-tale" than typical fantasy.
* The world which is not black and white and is inhabited by believable characters.

Easy to use
* Thanks to transparent and intuitive controls, players are able to enjoy the game right after beginning without a long learning curve. During the game the complexity of the system will be gradually uncovered.
* All actions can be done using the mouse only, however shortcuts for all of them are fully configurable.

Those with less than the min specs need to run the game with -dontForceMinReqs command-line option passed to the game or it'll refuse to run (though I'd imagine it's quite unplayable for them at some points). This also needs at least v1.2 patch to have been applied (preferably newer, but 1.2 introduced the option).

Andrzej Sapkowski, the creator of the Witcher universe, stated that he would not play the game since he has no interest in video games in general. However, he praised the game's opening cinematic, which (partially) tells the story of Sapkowski's very first short story, called simply Witcher (Wiedźmin). The Polish version of the game also comes with this short story.

leszy # 2014-10-03 16:22:43
The original (Polish) version of the game features some allusions to the Polish national-conservative party Law and Justice (Polish: Prawo i Sprawiedliwość). The party's name is mentioned by NPCs in the game in connection with corruption and discrimination against non-humans. Also at some point Geralt may dismiss an NPC saying "Spieprzaj, dziadu!" (approximately "Piss off, old man!"). The cofounder of Law and Justice and president (at the time the game was released) of Poland Lech Kaczyński once famously said those words to a heckler.

There's also a separate patch ("Director's Cut") that restores the North American version to the same uncensored level that the original European release is. Works on any version from Enhanced Edition onwards.

Sanguine # 2008-10-03 18:20:24
Although the game has endurance meter, this is only used for casting the magic signs and therefore not eligible for stamina/endurance tagging.

The censoring (in NA release) is associated with all the instances where you have sex with the gals. This shows only a very scantily clad art piece of the person and nothing else, so it isn't really that explicit even. More like extremely suggestive. The art pieces were re-touched to make them more modest (such as bare breasts being covered). The dryad NPC was made to have more cover as well in-game (the dryad is fully nude in European releases, though the textures are blurry and don't show any great detail).

The Enhanced Edition is available for free as downloadable update for the owners of the original, although it is worth 909 MB of data so expect it to take a while. 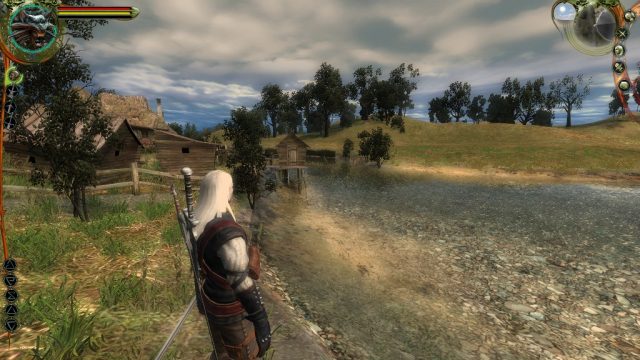