Captain Bible in Dome of Darkness

During installation, the user has the option of censoring Bible verses dealing with "marriage, divorce, and fornication" from appearing in the game. The user can also chose that only a single version of the Bible be available, rather than having King James, New International Version, Revised Standard Version, and The Living Bible available to choose during the game. The user also has the option of removing all actions and references dealing with combat (with Deception Cyber robots) except the end-game sequence that includes an explosion. But the user is warned that removing combat removes action, makes the game easier and less fun. 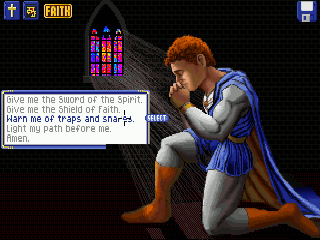