An updated version of the never released remake of the original King's Quest II. That is, a remake of a never released remake :) Text input, except for a few key plot necessities, is replaced with point&click. Graphics are beautiful VGA. Superb music and sound (optional). And many of the original voice actors from later official King's Quest games lent their voices to this unofficial remake (also optional). Play in window or full screen, 1.33 fullscreen (anamorphic) or 1.60 widescreen, and 320x200 or 640x400.

Like the original, this game is unfair :) So save often. A knowledge of nursery rhymes, anagrams, fairytales, folktales, legends, ancient and classical literature such as Shakespeare is helpful. There are many objects to find and use in the game to score points. There are usually several solutions to a problem that score a different amount of points. Misusing items will subtract points, sometimes permanently.

Choose "The madness of King Graham" during the three tests (not always a choice).

This game references an unusual number of other works. They are listed in a replay to this article. 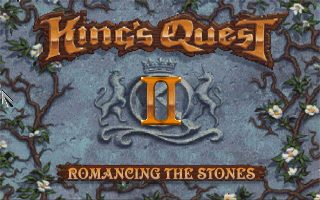