Operation Shadow is a war themed 3-D third person shoot em up with an emphasis on fast paced action using multiple vehicle types and weapons. The player assumes the role of Jay Solano, a military man who must battle against invading forces in order to protect his country from potential destruction and occupation. The game follows Solano's efforts to defeat these factional enemies and uncover who or what is behind their newly formed alliance against his homeland. The player can control Solano as he takes on the enemy in helicopters, tanks, jeeps and on foot and has the option of switching between each of these strategic choices at will. Solanos enemies are varied too, with each faction sporting unique vehicles and environments. Landscapes are generated in true 3D with deformable structures offering unparalleled 3d action on the Nokia N-Gage. 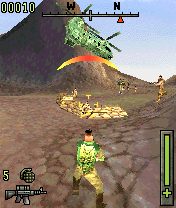