For the PLATO system.
The first multiplayer 3D game. Reports of a 2 player 3D game created in 1973 remain undocumented. The way games were destroyed without mercy by administrators, it is possible there was an earlier multiplayer 3D game.
1 to 32 players simultaneous.
Spasim had 4 planetary systems/factions (Aggstroms, Fouriers, Defractions, Lasers) each with teams of up to 8 players each. Players could be located anywhere in the real world. Players flew around space in 1st person view. They saw other players as solid wireframe space ships (in later versions). All this at the breakneck speed of 1fps. By solid, it is meant that the ship wasn't just lines but actually obscured objects calculated to be behind it and show objects that were in front.
Movement was done in polar coordinates, positions were calculated in Cartesian coordinates. Players had to calculate coordinates while phasers cut through space and photons exploded all around them. Requiring these calculations under pressure convinced administrators the game qualified as educational and it was spared the fate of deletion that claimed so many other PLATO games of the era. Aditionally, a fair amount of astrophysics knowledge was useful to gameplay.
In addition to 3D shooting action, the game also had an underling resource economy model being simulated. In order to keep their ships in production and stocked with fuel, weapons and pilots, teams had to manage planetary resources.

Applications on PLATO could only be identified by 6 characters. Jim Bowery wanted the name of his game to be "Space Sim" abbreviated Spasim. But much to his dismay it was popularly referred to as "spasm".

Version 2.0 released in July 1974 could run at higher fps and saw the addition of Space Stations, more resources, more active management, a larger universe, team to team resource trading and politically involved planetary populations that had little tolerance for war yet a high demand for resources. Cooperation was a must in order to find resources that were spread over a much larger area. If wars lasted too long, players mismanaged their planet, or players spent to much on exploration without results, the population would revolt.

Version 3.6 (c)1976, is now playable on cyber1. Presumably the source code for this version is available.

In 1983 Jim Bowery had a fit of disillusion and deleted all trace of Spasim from the PLATO network and created The New Spasim. Though unlikely, the source code for the final version may still exist.

was remade as
The New Spasim (PLATO)

has this MOD
Airace (PLATO) 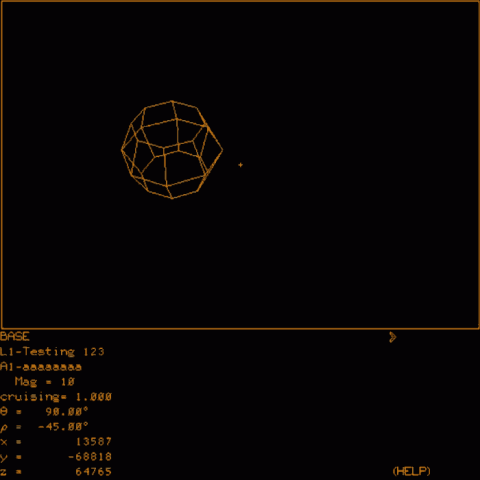 Note that one can see the parts of the object that should be hidden. Later versions would not draw objects and parts of objects that were obscured.