Sanguine # 2008-10-03 08:10:01
EV Override, the second game in [[company:Ambrosia Software]]'s Escape Velocity series, has no major improvements over Escape Velocity Classic, other than the galaxy being approximately five times larger. The game is available at [[link:http://www.ambrosiasw.com/games/evo/ AmbrosiaSW.com]].

Following the release of [[game:EV Nova]], EV Override was ported to EVN, and could now make use of the faster, redesigned EVN engine. This also enabled a few enterprising graphics designers to update the relatively primitive graphics of the earlier game.

Mankind leapt for the stars as it did for all its other frontiers.
With greed for the riches to be had and ignorance of the forces it was dealing with.
This time ...
... it will be lucky to survive.

After a century of interstellar flight mankind was totally unprepared for the huge ships which came from the depths of space with one intent ...
... obliteration.

The Voinian War was upon us.

But the Voinians made the mistake of attacking the humans on their home ground, of underestimating human ingenuity ...
... and defiance.

Then the Voinians threw all their forces at one point, which happened to be the Sol system.

Their fleet, as much to the humans' surprise as to the Voinians' own, was crushed. Buzzing mosquito fighters attacking from the asteroid belt, wolf-packs of destroyers surprising isolated Voinian hulks; one by one the impressive Voinian vessels were reduced to burnt-out wrecks.

The Battle of Sol was a triumph for mankind, especially since over a third of the Voinian fleet was destroyed during the conflict.

The tide of the war had turned.

Today the Voinians are held back along a heavily defended frontier and United Earth forces match them shot for shot, raid for raid, offensive for offensive.

But mankind also has problems among its own: All united against the Voinians, and the United Earth government was formed. Now colonists who have never seen a Voinian ship are becoming restless. Their taxes are being spent to defend them from distant threats, their children go to fight a war that means nothing to them.

And most of all they are ruled by a distant Earth government.

Elsewhere there are many areas of space that remain unexplored, and mankind remains oblivious to all the threats, and opportunities, that lurk there.

Into all this you are thrown.

Having graduated from the United Earth Naval Academy, you decline the opportunity to become just another fighter pilot, navigator, engineer or command officer, and set out to forge a destiny of your own.

Captain, the universe awaits you ... 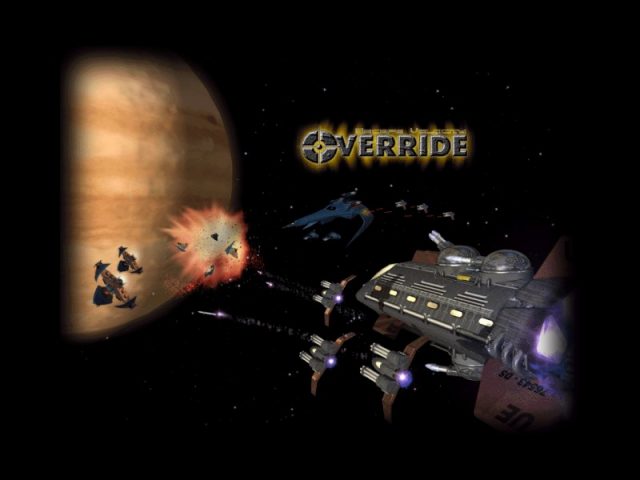 The main splashscreen for EV Override (as seen in its port to EV Nova).
View the full gallery