Set in the grim, dark future, Take No Prisoners puts you in control of Slade, a post-apocalyptic mercenary empowered with the choice to destroy the world...or save it. Based on Raven Software's in-house Vampire engine, Take No Prisoners was developed concurrently with MageSlayer from July 1996 - August 1997 and was released by Red Orb Entertainment, a division of Broderbund Software.

Originally called RIOT (and subsequently Outrage), Take No Prisoners pioneered a new variation of top-down gameplay made popular by the arcade classic Gauntlet by setting the character at the bottom of the screen and exploring the world from a 2 ½D view. This innovation was hailed as a "fresh new perspective" and a "breath of fresh air" in the action gaming genre.

Take No Prisoners shipped with 30 single-player levels, 22 different enemies, 21 weapons, 22 combat items, 3 usable vehicles and a variety of multiplayer game modes including deathmatch, capture the flag, arsenal and assassin. In addition, Take No Prisoners was one of the first games to hit the market that took full advantage of 3-D hardware acceleration and colored lighting.

map - limited to showing how the zones are connected to each other. In-zone maps are missing.

direct3d - main difference over software rendering is 800x600 resolution support, 16 bit display support (primarily for colored lighting) and linear sampling.
display-640x480 - characters use higher resolution sprites at this than when played at 320x240, the UI textures are stretched however.

Note: Although DX3 is enough to play the game, the game's readme suggests DX5 as the game supposedly performs much better on it. 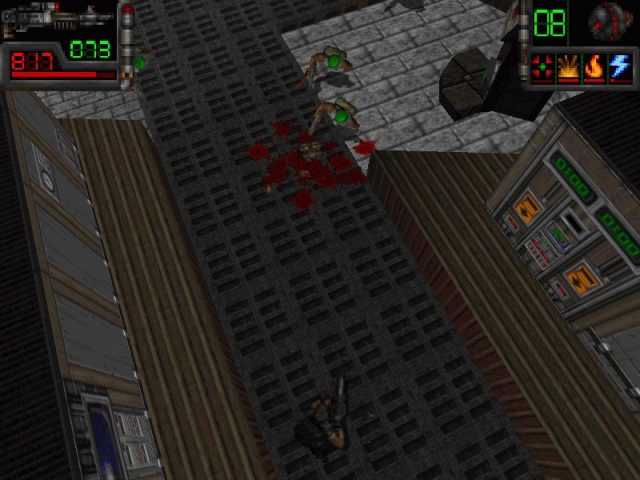