Otherwise great game, except the combat had ridiculous control mechanism, the fact that the story ends in middle of everything and they should've left the zealot guy and April as NPCs (what's with April's new goth outlook anyway?). The locations also felt ridiculously small and made me think of some age-old consoles and their smaller than sensible limitations. Have to say that I prefer the original.

6 years after the critically acclaimed modern adventure The Longest Journey was released comes the sequel Dreamfall. It will feature some characters from TLJ, but will concentrate mostly on a new cast. The premise is that the Earth we know is actually only half the story of the universe. Our scientific Earth's true name is Stark, and its reality is mirrored in another dimension by a magical Earth called Arcadia. The game concerns a young woman named April Ryan who lives on Stark in the 23rd century. When a disaster throws the balance between the scientific and magical Earths out of whack, it's up to April to step in and restore equilibrium between the two universes. Core to the story are three playable characters: Zoë Castillo a twenty-year old young woman who lives with her grandfather; Kian an assassin who will begin to question his beliefs and returning from TLJ, April Ryan who will discover that no matter how hard you try, you cannot escape the past. In what can best be described as a modernized version of point-and-click, characters will have an innovative 'focus field' that allows you to interact with and scan the environment. Instead of point-and-click, you sweep the area with the focus field to find interactive objects or inventory items. One of the puzzles we were shown utilized the 'focus field' as your character had to light a torch and it does facilitate a smooth transition between puzzle and game without interrupting the flow of the game.

Although the main character is Zoë Castillo, you get to control April Ryan and the zealot guy too for a time and see what they're up to.

sequel of
The Longest Journey (Windows) 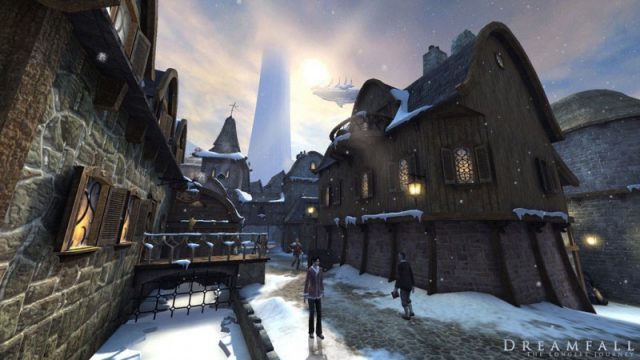