The I of the Dragon

The I of the Dragon is the unique Action-RPG where you control not just a puny magician or a stupid barbarian, but a dragon, a huge, powerful magical beast. It starts young and relatively weak, but it grows and learns as the game progresses. 12 huge levels (tens of square kilometers each) hold huge hordes of enemies - more than 40 kinds of evil monsters. You'll help humans to cleanse their land and restore peace, and they'll help you back with new magic spells and their fighting abilities.

Advanced graphics engine created by Primal Software for this game allows us to show huge battles with tens of enemies and humans. Even beautiful special effects are not just eye candy - they drive the gameplay (for example, our terramorphing can change the landscape, raise mountains and fiery volcanoes or create huge ravines that monsters can not cross), change it (day and night cycle changes your fighting tactics), etc.

Highlights:
* A mystical land filled with magical creatures is your playground. And this time you are a not some puny magician, or a stupid barbarian. You are a Dragon! A power to be reckoned with... Fly with the wind. Protect the people, fight the monsters, set fire to forests, level entire mountain ranges!
* Huge levels: each one has tens of square kilometers full of rolling hills, mountains, dense highly-polygonal forests, stones, buildings and other objects
* Real-time terramorphing lets you level down whole mountain ranges and raise new ones instead. Earthquakes, Volcanoes, Craters - you call the shots
* Time of the day with smooth real-time lightmap blending - watch magnificent sunsets and don't forget to look up at five thousands of stars visible during the night. Try to find some familiar constellations
* Three dragons available, each with its own inherent abilities (fire, acid and ice based) and different set of stats which greatly increase replayability value. Make a "fighter"-type dragon, a "mage" or a "sniper" to suit your tastes - possibilities are endless
* Of course, some different kinds of magic are there, so you won't be limited to throwing flame at monsters. Freeze them, tamper with their minds, summon familiars, heal friendly monsters that citizens tamed, learn to locate important objects or teleport to them directly - there are more than sixty spells with breathtaking special effects for each one

Sanguine # 2015-03-04 12:22:16
About widescreen support:
The game unfortunately fails to start after you set a wide resolution, but you can get past this by deleting (or renaming) the Intro.avi in Data/Video/English/ folder or similar path in case of other languages. 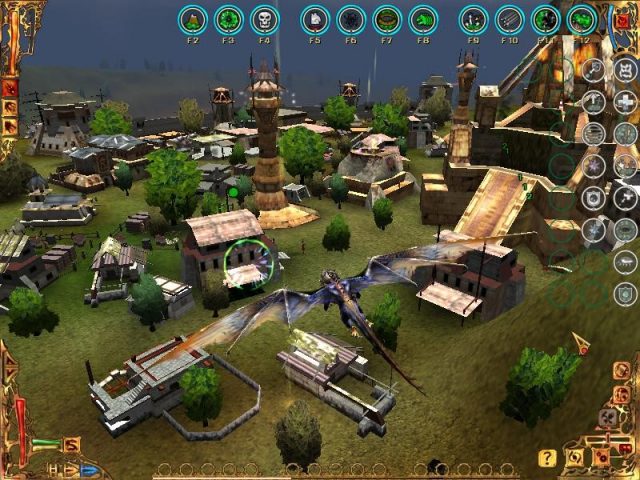 The I of the Dragon in-game screen.