Sword of the Stars

Sword of the Stars is a breakthrough 4X Strategy game brought to you by the core team behind the highly acclaimed title, Homeworld: Cataclysm. Sword of the Stars returns gamers to the action-packed roots of the 4X genre with some new twists, including a 3D starmap and real-time combat resolution in a 3D environment!

Playing as one of 4 unique races, gamers will explore planets, research new technologies and create empires in a hostile universe where weakness means extinction and only the strongest will survive. Sword of the Stars provides quick, intuitive play, state-of-the-art graphics and tactical combat that make the game instantly involving and rewardingly fun.

* 4 distinct races - Human, Hiver, Tarkas and Liir - each with their own technology advantages and disadvantages.
* A powerful state of the art engine delivers breathtaking graphics and robust gameplay.
* Each race has a unique mode of transport between star systems, creating very different styles of play, depending on what race you choose to control.
* Slider bar controls and simplified interface to avoid the confusion of other games without sacrificing depth of gameplay.
* Over 150 distinct technologies to research on a dynamic tech tree that changes from game to game. While the core technology of the tree is consistent, certain offshoots are random from game to game. There is no perfect path up the tech tree to memorize and exploit, because the path keeps changing!
* New technology reflected in detailed ship models, weapons and combat effects. Over 40 weapons from six different weapon classes, in various size classes, from point defence, turrets, to massive spinal mounts!
* Players can design and build ships from three size classes - Destroyer, Cruiser, and Dreadnought - by mixing and matching ship sections (command, mission, and engines), then outfitting them with armour and weapons to suit their preference.
* Up to 8 players can play against the AI and one another over LAN or online.
* Choose from a variety of scenario campaigns to play alone or with friends, each adding more colour and depth to the Sword of the Stars universe.

expansion:
Sword of the Stars: Born of Blood (Windows) 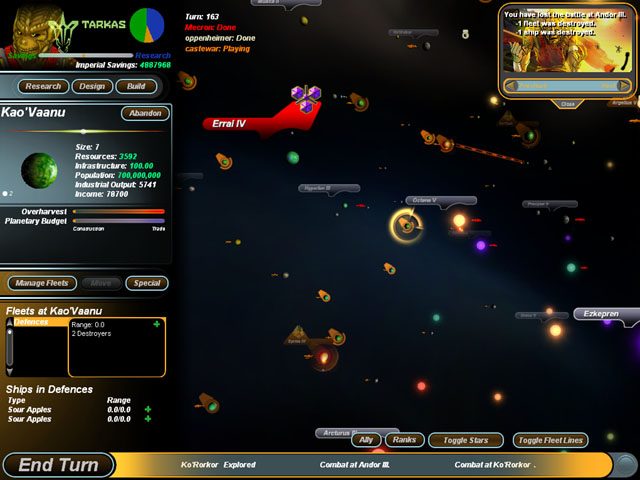 Sword of the Stars in-game screen.