Sword of the Stars: Born of Blood

Forged in the fires of advanced biotechnology, a new race has emerged from the shadows to threaten the SotS universe. Born of blood, driven by hunger and launched on a relentless search for the Gods that made them, these brutal warriors will stop at nothing to find "The Great Masters." As they tear the galaxy apart, a dark new chapter in the annals of interstellar conquest will begin. Bringing with it new strategies, new weapons, and a new view of "resources."

They call themselves The Zuul. And they have uses for you.

* 1 new race - the Zuul - with 80+ ship sections and Tunnel Drive FTL technology.
* Massive Zuul slaver disks allow them to take slaves and use them to boost production on Zuul fortress worlds.
* Over 15 new weapons with which to battle, including Boarding Pods!
* Over 25 new technologies to research and deploy.
* New diplomatic Data and Comm systems. Make demands! Ask for help in attacking specific targets. Warn players off from the worlds you have yet to claim!
* More Intelligence technologies allow you to keep track of enemy ships, tech and battles.
* A new trade route system making economic control and output even more vital for military success. Star freighters ply the trade routes making money for the player but are also vulnerable to raiders. Active piracy and escort battles enter the SotS universe with a bang.
* Details combat results and status graphs allow you to track the rise or fall of your empire over time.
* A variety of new ship sections for the original races to help meet this new threat.
* More tactical combat options.
* New combat arena as ships are called upon to battle in the dangerous depths of Node-space.
* New random menaces / exploration threats.
* 2 new Scenarios (for both single- and multiplayer).
* 5 new galaxy types.
* Various GUI and multiplayer enhancements.

expansion:
Sword of the Stars: A Murder of Crows (Windows)

expansion of
Sword of the Stars (Windows) 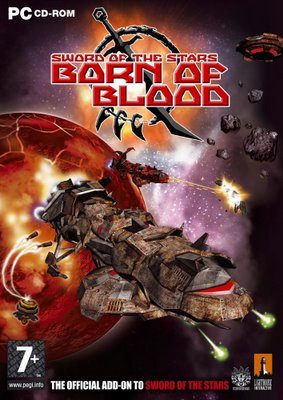 Sword of the Stars: Born of Blood package.
View the full gallery