It’s 2156, and the world has been destroyed by both nuclear and bio-chemical means. Your story takes place in one of the few habitable places left in the world, the Grand Canyon. As a clone with an uncertain past, your job is survival in a world now built on destruction, betrayal and fragile factional alliances.

Explore, harvest and stake your claim to over 1,000 square kilometers of harsh and mysterious terrain. The classless advancement and non-linear gameplay allows you to play the character you want. Join a random dynamic events to capture resources and invade towns, capture and hold a Progress Town, fight through instances, take part in the rich faction backstory, or make a living by selling what you scavenge and craft on the auction house. Fallen Earth gives you the freedom to do exactly as you want. The world may be a shadow of its former self, but there’s no limit to what’s possible for you to accomplish.

Key features:
* Scavenge, harvest and craft just about anything you can think of. Over 95% of the in-game items are player crafted.
* The hybrid real-time combat system gives you the perfect blend of first-person combat and role-playing
* Pledge allegiance to one of six factions and take part in the rich backstory that defines the world of Fallen Earth
* Completely classless, play the way you want to
* Over 1,000 square kilometers to explore
* Dynamically occurring events, including invasions and resource cache discoveries mean that there is always something happening

Blood Sports is the subtitle of one of the free expansions/patches for the game, but the the game is also sold as Fallen Earth: Blood Sports. 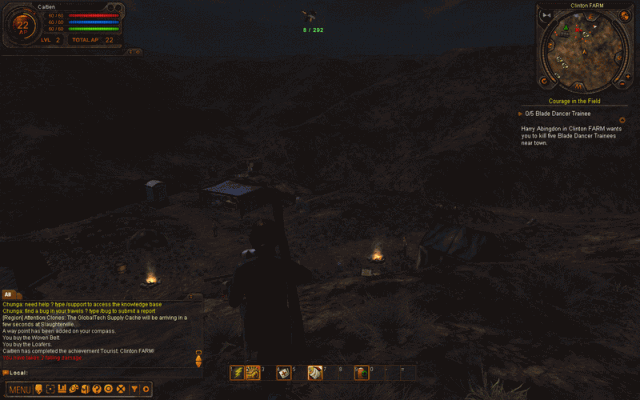