Overview:
Dr. Aiden Krone is a former professor of Applied Physics at MIT, notorious for his unrivaled brilliance and obsession with Thermodynamics, Advanced Propulsion, and Quantum Electrodynamics (QED). Despite his increasing tendencies to demand control and secrecy, he became the Founder and Lead Physicist of a classified Time Travel research program.

Over a decade later, Krone's program had successfully developed the world's first time-travelling suit technology. However, as the program's equally secretive decsision-makers demanded this technology be adapted for military applications, Krone's feelings of self-entitlement and anger grew. He secretly desired a new existence, a new world where his scientific endeavors could be shaped and experienced without outside interference.

The combination of Krone's mind and his suit technology gave him the ability to create and control another existence - an existence where a man of science could finally operate without restrictions and do so within a place where science itself was properly respected regardless of the effects on humanity.

It is now up to you to trace Krone's last known appearances and stop his tyrannical rule over Alpha District. In a twisted world where scientific accomplishments reign, its up to you to don the Beta Suit and Master Time to Become the Ultimate Weapon.

Features:
* Harness time as the Ultimate Weapon: Slow, stop and reverse the flow of time to destroy your enemies
* Unleash a powerful arsenal of weapons and vehicles in 24 combat missions
* Up to 16-player multiplayer, featuring the use of time grenades in 14 different maps, allowing for unique style of stop, slow and reversal of time
* Completely customize your multiplayer experience with 40 different features to fit your style of gameplay 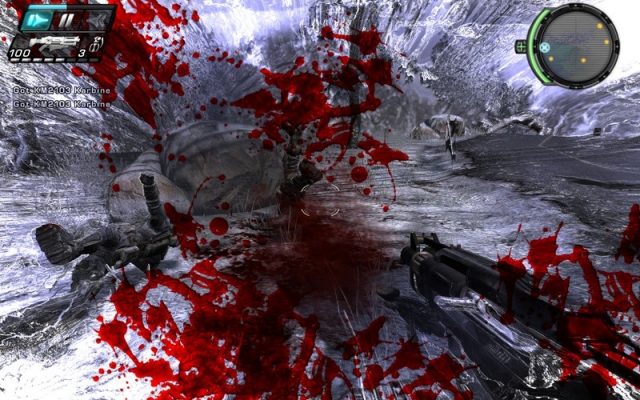