For any Aliens fans, this game will be horribly disappointing. Despite the gratuitous fanservice from including LV-426, Hadley's Hope, Sulaco, the Derelict and its dead Jockey pilot, Hicks, and various other things from the movies, this game utterly fails to deliver on the atmosphere of the films. Alien acidic blood is only a minor annoyance, player can trivially fight the aliens in melee, the aliens themselves seem incredibly lazy, the way player can carry ~10 different weapons with separate ammo for each, extremely linear locations, and whatever else make this feel unsatisfying when you come to it expecting a proper Aliens game. The license seems almost wasted on it considering how much they deviate from what fans of the franchise would expect. If they had made this a game with no ties to Aliens franchise it would've probably been half-decent, but as it is, it fails to be what it is supposed to be. The graphics are the main point where this actually is quite good at, though for PC game they're kinda low fidelity, but nothing you wouldn't expect from a game that's published on the usual platform trio (X360/PS3/PC).

To summarize: fans of the Alien franchise, keep away. People who don't care for the franchise on the other hand, this can work as a mediocre tube shooter. 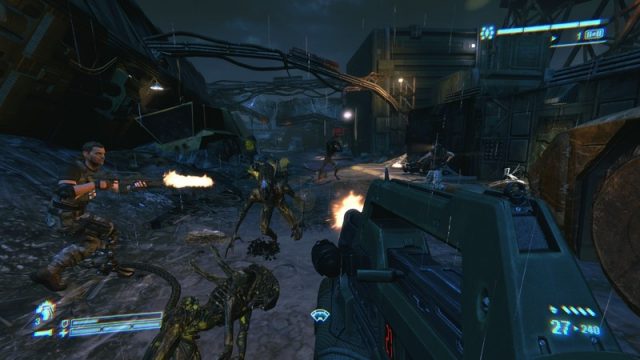