Left 4 Dead [...] casts up to four "Survivors" in an epic struggle against hordes of swarming zombies and terrifying "Boss Infected" mutants.

Set in the immediate aftermath of the long-awaited zombie apocalypse, L4D's survival co-op game mode is played out across four sprawling "Movies" set in a variety of urban and rural environments. Each "Movie" has an over-riding team objective, is comprised of five large maps, and may be played by 1 to 4 human players.

New technology dubbed "the AI Director" is used to procedurally generate a unique experience each time the game is played. Just as in Hollywood films, the Director calls for new monsters, sounds, and action as it tailors the gameplay experience based upon the team's performance.

Sanguine # 2009-07-04 00:34:35
bleeding - border case as this only occurs when a player gets incapacitated and waits for someone to assist them.
hypermobile foes - hunters mainly, the others have only slightly higher mobility than the protagonists.
karmic creatures - boomer, killing him in close quarters has the same effect as having him barf on you.
killing blow - the common infected are so very fragile. not applicable to the special infected.
elite npcs - the special infected.

asymmetric factions - versus mode, the infected and the survivors.

Sanguine # 2009-05-22 13:21:32
Built for multiplayer cooperative play (with up to four players), single player is the same as multiplayer except the other characters are AI controlled and not the intended point. The AI generally controls all missing players even in multiplayer games and takes over temporarily if a player goes AFK (at least if they tell it to). 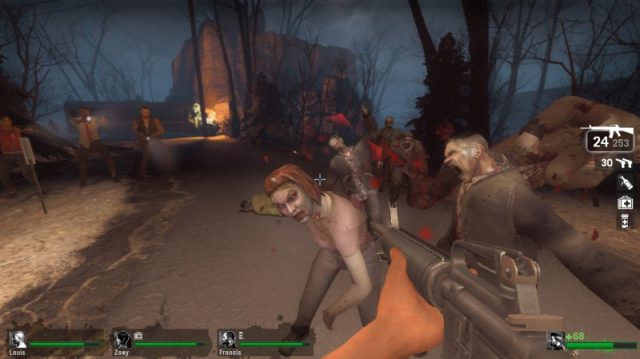