The Lord of the Rings: The Third Age

* Play on the side of light or shadow. In an adventure that intersects the main plot points of the film trilogy, battle on the side of the Fellowship in their quest to save Middle-earth or unlock the evil missions where you fight on the side of Sauron.
* Deep gameplay that expands all three films. Travel to familiar and unfamiliar places such as the Mines of Moria, Helm's Deep, Pelennor Fields, Minas Tirith, and a host of unexpected locations like the White Mountains Plains.
* Customize your hero or villain: Upgrade your character with an in-depth skill tree system where you can acquire unique skills in melee combat, ranged weaponry, defense, and magic.
* Discover a vast array of weapons, armor and clothing, and other Middle-earth items.
* Free-roaming gameplay. Explore, take on side quests, and uncover secret characters to join your party, or special weapons and items to boost your existing characters.
* Fight alongside or against key characters from The Lord of the Rings such as Aragorn, Gandalf, Legolas, Eowyn, and the Balrog.
* New user-controlled cameras keep players aware of everything around them.
* Innovative turn-based battle system allows you to fight on horseback or Warg and define the rules of engagement.
* Voiceover from the original actors and assets from all three The Lord of the Rings films. 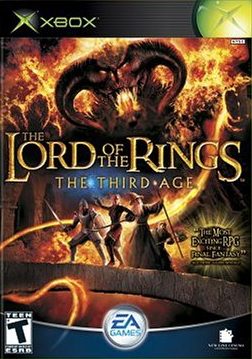 The Lord of the Rings: The Third Age package.
View the full gallery