a.k.a. Total Overdose: A Gunslinger's Tale in Mexico

The year is 1989 and deep in the sweltering heat of the Mayan jungle, camouflaged among the Inca ruins; Ernesto Cruz catches his breath as he makes a last gasp effort to board a DEA plane to take him to safety. He never made it home, the tragic victim of an alleged "overdose".

The search for their father's killer takes twin brothers Ram and Tommy through 18 different environments from the city of Los Toros to the Mexican desert. From stylized Mexican neighborhoods and jungle hide-outs to the swanky California coast; Total Overdose is an over-the-top, adrenaline-fueled, free-style action, 3rd person cinematic adventure with a strong whiff of tequila.

60+ Super Cool Moves - Combine different moves to pull off high scoring kills. It's not just about shooting, but doing it with style.

Combo Timer - Each time you waste a bandito, the Combo Timer starts a countdown. If the countdown reaches zero, the current combo is calculated as number of kills multiplied by style points and added to your total score.

Rewind System - Use the rewind system to return from the grave or to make perfect killa combos.

Control Any Vehicle - From cars and 18 wheelers to tractors and motorbikes, dive out of any vehicle at any speed to ram enemies and do ultimate stunts.

Huge Arsenal - A massive range of weapons. Unlock dual wielding to do double damage. The better you get the bigger your arsenal. 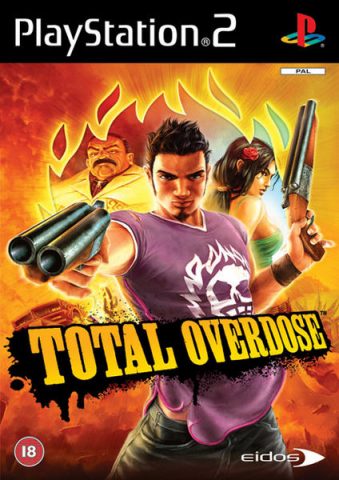