Not as great as I expected, and the driving around in Mako is horrible most of the time as well as the final bit of the ending just makes me feel sickly. My recommendation is, if you want to enjoy this game, stick to the main story and avoid any side exploration/quests completely, and try to bear the last bit of the ending (the parts where humans talk). Replayability comes mostly from dialogs as otherwise the game gets quite dull, and unfortunately you need those dialogs to progress your renegade/paragon ranks to open the more interesting dialog choices since these are separate from your regular leveling and skills.

Sanguine # 2008-07-03 03:12:45
technomagic — the "biotics" used in the game do not really fit into any of the groups we have neatly, technomagic and psionics being the closest, but since the ME universe also has psychics, technomagic is all that there's left.
multiple endings — more like ending with variations; the core of it stays the same.
However, a notable difference is that if the alien council survived or not, depending on if you chose to save them. If you didn't, humanity will take charge, otherwise humanity is invited to take place as the fourth council race. Other, "more important", details stay the same regardless.

special agent protagonist — player is appointed a job similar to this somewhat early in the game, so this isn't true from the start.
nationalism — the protagonist and his higher ups are constantly trying to drive the cause of the Human Alliance, it's importance and how you're part of it is constantly hammered at you and occasionally you get to do the same for others.
unlikely sentients — Rachni, Geth to some degree (in mythos puts them on par with rogue A.I.), the plant creature, and some others
dialog-keywords / dialog-stance — some are full sentences but not actually what is said, generally these are only choices on what to discuss and how to respond (aggressively or calm negotiator style) 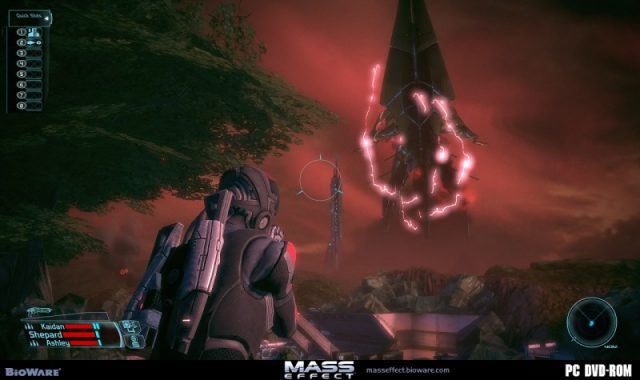