This is Namco's implementation of Ms.Pac-Man. Tengen had previously release another implementation in the USA that differs from this one. Tengen could do this because of a preexisting legal agreement with Namco giving Tengen the rights to publish Pac-Man games for home systems in the USA. This version was published soon after the agreement expired.

I know there is a Japanese Famicom version of Ms. Pac-Man. And it was released prior to this Namco version developed by Now Productions. AND it was developed directly by Namco (Namcot). I've seen it in those X-in-1 TV consoles (Famicom clone systems). Both legitimate versions that take advantage of some irregularities in Japanese copyright filing and illegal versions. There are also Brazilian and Australian releases that are probably based on the Tengen version but could also be yet another version of Ms. Pac-Man. And there's Hong Kong, Chinese, and Korean version that may be legitimate and based on one of these. However, there is a Famicom Disk System version that may be the basis for all of these 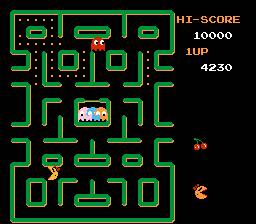