a.k.a. Hagane no Renkinjutsushi 2: Akaki Elixir no Akuma / 鋼の錬金術師2 赤きエリクシルの悪魔

The story begins in Lior, a desert city that Edward and Alphonse visit in the first episode of the animated series. As the brothers are unveiling the secrets of a cult called Leto, they are attacked by shadowy creatures from the unknown. Meanwhile, a frightening phenomenon is sweeping the country; people in many regions are vanishing without a trace. In Resembool, Edward and Alphonse meet an enigmatic alchemist. It seems that he has some connection with both the disappearances and the strange creatures encountered earlier. When Colonel Mustang sends the brothers to investigate a village plagued by these monsters, they meet Arlen, an archaeologist who is studying the ancient civilization of Lebis. Edward and Alphonse soon find themselves headed for the ruins of Siam-Sid, the capital city of Lebis, to discover the truth behind the monstrous creatures and the puzzling disappearances. 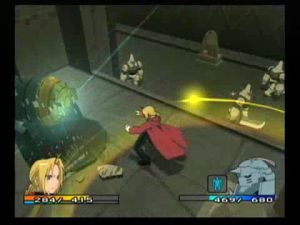