The next chapter in the Star Wars saga, Star Wars: The Force Unleashed , tells the story of Darth Vader's Secret Apprentice, a mysterious figure trained by the menacing Sith Lord, to hunt down the last of the Jedi.
Set in the dark times between Episodes III and IV, the story is both a continuation of the prequel trilogy – exploring the aftermath of Order 66, which called for the immediate execution of all Jedi, and focusing on the continued rise of Darth Vader – and a direct bridge to the Original Trilogy. The Force Unleashed will forever change the fate of the Galaxy and explain key plot points that directly lead into events in Star Wars: A New Hope.
The Secret Apprentice's journey takes him across the Galaxy—from the Wookiee homeworld of Kashyyyk to the junkyard planet Raxus Prime and the mushroom-covered planet, Felucia.
He is aided in his dangerous missions by a loyal sidekick PROXY - a prototype holodroid with amazing abilities, and an alluring Imperial pilot named Juno Eclipse.
The Apprentice will clash with powerful enemies, including the spirited Zabrak warrior Maris Brood, Jedi Master Shaak Ti, and General Rahm Kota, a hard-boiled Jedi soldier who senses that the Apprentice is destined to become something far greater than just Darth Vader's servant. 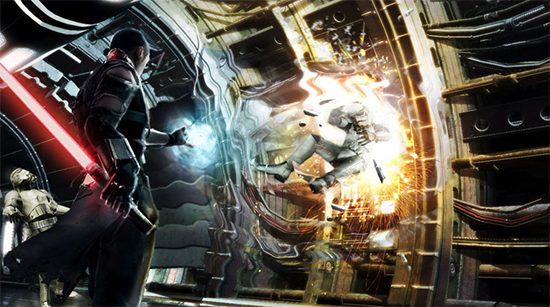