Taito's early Famicom games really leave a lot to be desired. Front Line is no exception. A pathetic arcade conversion. The player is a soldier who has to shoot everything in sight and walk his way up several screens until he gets into a tank. The rest of a level follows the same formula, just that you are using the tank to go up several more screens and destroy the enemy base. Bad graphics and sound combined with sloppy gameplay. 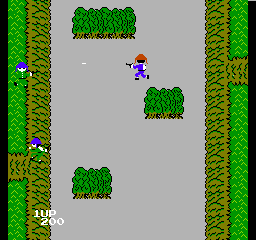