Hyper Sports is the second early 4 event sports game from Konami. The events consist of Archery, Skeet Shooting, High Jump and Triple Jump, which were all later also included together with the four other disciplines from Hyper Olympic in the US/EU releases under the name Track & Field. The four disciplines in Hyper Sports are all well done and motivating. Today you would say only four disciplines are not much, but this wasn't an issue at its release in 1985. Not quite as good as the similar, but more complex Summer Games, but still a good substitute for NES players.

4 988602 504170 may be the Hyper Sports set which includes the Konami HyperShot. Hyper Sports by itself may have another JAN code. 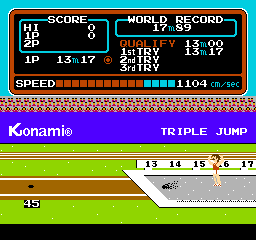