While UPL brought the official sequel to Ninja-kun into the arcades, Jaleco made this spin-off sequel for the Famicom. The game basically stays true to the original game. Kill all enemies on screen with your shuriken throwing little ninja to make it to the next scene where more enemies await you. Inside a level you reach higher platforms by destroying brick walls by jumping headfirst against them *ouch*. Instead of the mainly up-and-down scrolling levels of the original Ninja-kun game, Ninja Jajamaru-kun scrolls horizontally. By the graphics and sound you can see that it is a rather early Famicom game.

prequel of
Jajamaru no Daibouken (NES) 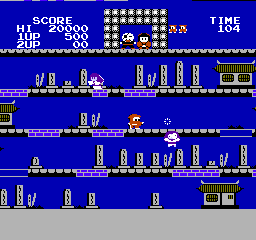