This island is called "Rainbow island". Here there is a tower used to monitor the island and protect everyone who lives there from harm. In that tower there live two inseparable brothers. The older brother, a slight and cheerful lad, is named Bubby. And the younger brother, named Bobby, is a shy and quiet boy who likes to read. Then one day something suddenly happens to disturb their peaceful and happy lives. That something was their being turned into dragons at the hands of a mysterious evil being. The same evil being that did this to them has also destroyed the magical Rainbow Potion elixir they need to return to human form. The evil being, however, has sealed himself into the tower. Why is it that Bubby & Bobby were transformed into the shape of dragons? And what was the true intent of the evil being that did this to them? 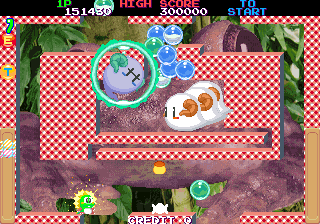