Set in Somalia in 1993, Delta Force - Black Hawk Down is based upon and around the Operation Restore Hope and Task Force Ranger campaigns immortalized in the book and movie of the same name. The game follows members of the elite Delta Force, US Army Rangers and 10th Mountain Division as they participate in a number of daring raids against the oppressive Somali warlords in and around Mogadishu.

Delta Force - Black Hawk Down recreates the intense atmosphere of a war-torn country. From tours of duty in the vast Somali countryside, where snipers could lurk on top of any hill - to the maze like streets of Mogadishu, where militia and civilians blend seamlessly. The task of discerning enemy from refugee is vital, as a wrong decision could cost you your mission.... or your life.
Features:

* Experience 16 intense single player missions, similar to those encountered in Somalia.
* Engage in close quarters battle, sniper fire, air attacks and room takedowns as a Ranger or a member of Delta Force.
* Test your fortitude in 4-player split screen Co-op missions exclusive to Xbox, or fight it out over Live in Team Deathmatch, Deathmatch, TKOTH and much more!
* Communicate with your teammates using the Xbox headset and issue commands to your AI teammates using advanced voice recognition technology.
* Prepare yourself for the battle ahead in tutorial mode.
* 50 players on Xbox Live! – The largest Xbox Live! game EVER!
* Based on the #1 best selling PC game: Delta Force - Black Hawk Down
* Centered upon real events encountered by U.S. Special Forces Soldiers in Somalia, 1993 with authentic weapons, vehicles and terrain.
* Developed with the direction of Special Forces Soldiers during Operation Restore Hope and Task Force Ranger.
* 8 Multiplayer game types, including DeathMatch, Search & Destroy, Capture the Flag and Team King of the Hill.
* Co-Operative mode with 4 player split screen.
* Downloadable content over Xbox Live!
* 4 unique player classes - Sniper, Gunner, CQB & Medic.
* Insertion by MH-6 helicopter transports, Black Hawks and ground based transports.
* An AI system that drives friendly teams and enemies to carry out strategic, lethal combat maneuvers.
* An arsenal of authentic weapons as used by US Special Forces during Operation Restore Hope and Task Force Ranger.
* Huge and varied landscapes that transport the player into the middle of a chaotic war zone. 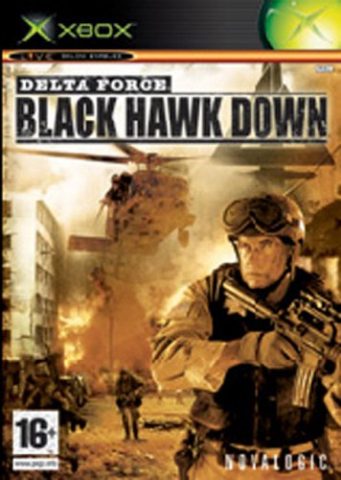