a.k.a. Tatsunoko vs. Capcom: Ultimate All-Stars

Capcom's popular and critically acclaimed ‘VS’ fighting series is getting an all new next-generation introduction. Tatsunoko vs. Capcom pits Capcom’s iconic characters against Tatsunoko Productions anime superheroes. This clash of heroes face off in two-on-two battles for the ultimate 2D tag-team battle. Originally released in Japanese arcades in the Fall of 2008, the original Tatsunoko vs. Capcom moved to the Wii console on December 11, 2008. This fighter blends these two rich universes by taking Capcom characters like Ryu from Street Fighter, Morrigan from Darkstalkers and the giant PTX-40A from Lost Planet and putting them against Tatsunoko fan-favorite characters from Gatchaman, Hurricane Polymar, Casshern and more. It’s a battler oyale that delivers match-ups that only exist in fans wildest dreams! Unlike the more well-known six-button layout that the Street Fighter franchise pioneered, the VS line features a simplified four button system: Weak, Medium, Strong and Assist for the tag-team option of. The Assist feature adds another compelling element found Capcom’s other VS series: allowing players to switch their character on the fly or call for help from their tag-team partner, allowing for spectacular super moves (Hyper Variable Combination). Successful execution of the Assist feature can turn the tide of battle on a dime. Historically the VS series excels in integrating the tag-team options by including customized moves like Variable Assist, Snapback, and the previously mentioned Hyper Variable combination that lets both characters on one team perform their Hyper attack. TvC enhances the above gameplay with new mechanics, including the Variable Aerial Rave that allows characters to be switched in the middle of an Aerial rave. More moves include the offensive Assault and defensive maneuver Mega Crash. Another new gameplay mechanic, titled Baroque, illuminates the character in a rainbow of colors, cancels the current attack and extends combos and damage. Featuring a robust line-up of characters, the console version added four mini-games and optional control schemes. 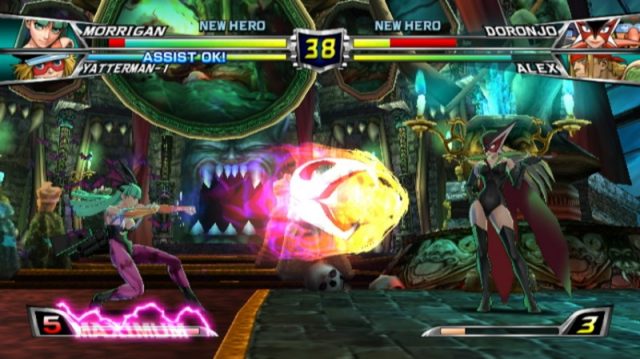