Company of Heroes: Tales of Valor

Company of Heroes: Tales of Valor is a stand-alone sequel for the award winning real-time strategy game, Company of Heroes. Tales of Valor contains three campaigns based on historical events from World War II. There are a great many stories to be told from the war, and these campaigns each tell a unique and intimate tale that is translated into gripping tactical combat.

Tiger Ace is the first of the three campaigns, telling the story of The Battle of Villers Bocage over the course of three scenarios. The battle takes place in France, 1944, as Allied forces stream ashore from the beaches. A British armored column threatens to break through a gap in the German lines, but a fearsome Tiger Tank commanded by a veteran crew races forward to engage them in the town the battle was named after, Villers Bocage. Take Direct Control of your lone Tiger, invest command points in your tank crew to unlock new abilities, fight to keep your crew alive and your unit from being out flanked!

Three Immersive Storylines
Take command of key soldiers and experience how they helped turn the tide of battle in some of the most historic clashes of World War II.

* Episode 1: Tiger Ace: Control Tiger Tank Ace Hauptmann Voss's highly decorated Tigergruppen against the British 7th Armored Division on D-Day in one of the most famous tank battles of WWII.

* Episode 3: Falaise Pocket: Command the Wehrmacht Army as your soldiers try and hold off the advancing Allied army.

Direct Fire Control
Not only can the player's tactical and strategic decisions influence the battle, but players also directly control units on the battlefield. Players will aim, fire, and maneuver in real-time to capitalize on the changing battle conditions.

Command New Units
New infantry and vehicles such as the Schwimmwagen and Staghound will be available. The Schwimmwagen is an amphibious, all-wheel drive off-road vehicle while the Staghound is a highly maneuverable 4x4 Armored Car.

Conquer New Territory
New maps based on famous battles such as Villers-Bocage will be available for competitive players in the online battlefield.

Three New Multiplayer Modes
New multiplayer modes to experience with your friends. Become a tank commander and square off in Panzerkrieg, choose a hero unit and join the battle to push the enemy lines in Assault, or team up and defend against waves of attackers in Stonewall.

direct control - affects only firing controls, a variation on telling units where and what to attack in more personal manner. Something queued attack commands usually do in other games in less time consuming way.

expansion of
Company of Heroes (Windows) 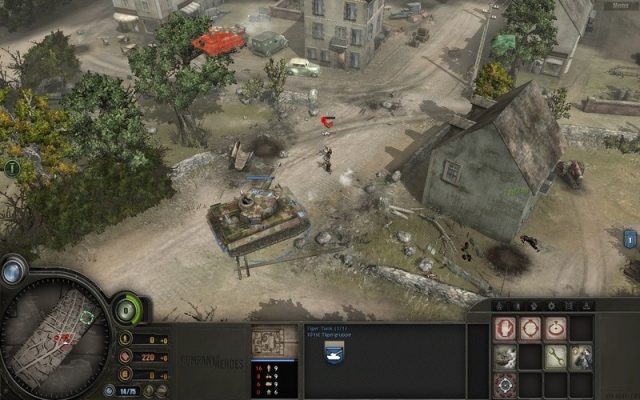