DESCRIPTION
Kobo Deluxe is a 3’rd person scrolling 2D shooter with a simple and responsive control system - which you’ll need to tackle the tons of enemy ships that shoot at you, chase you, circle around you shooting, or even launch other ships at you, while you’re trying to destroy the labyrinth shaped bases. There are 50 action packed levels with smoothly increasing difficulty, and different combinations of enemies that require different tactics to be dealt with successfully.
Kobo Deluxe has an improved graphics engine that delivers smoother animation, while keeping the game logic totally accurate and predictable regardless of frame rate. It also adds sound effects, new graphics, fullscreen mode, four extra skill levels with smoother gameplay and various other features expected from a modern game. (There is still a "Clasic" mode that plays exactly like the original XKobo.)

Kobo Deluxe uses SDL for sound, graphics and input, and builds and runs
on all major operating systems, as well as some more unusual platforms.
It can also use OpenGL for accelerated rendering, through glSDL.
In short, Kobo Deluxe is loads of classical arcade style fun for just about any machine with graphics and sound!

CONTROLS
The ship can be controlled with the keyboard, or optionally a mouse or joystick. With the keyboard, the arrow keys move the ship (two keys for diagonals), and the shift and ctrl keys shoots. The numeric key pad can also be used; the usual 2/4/6/8 (arrows), and also 1/3/7/9 for single key diagonals. Escape enters the meny system, from where it is possible to change settings, start a new game or exit the game. 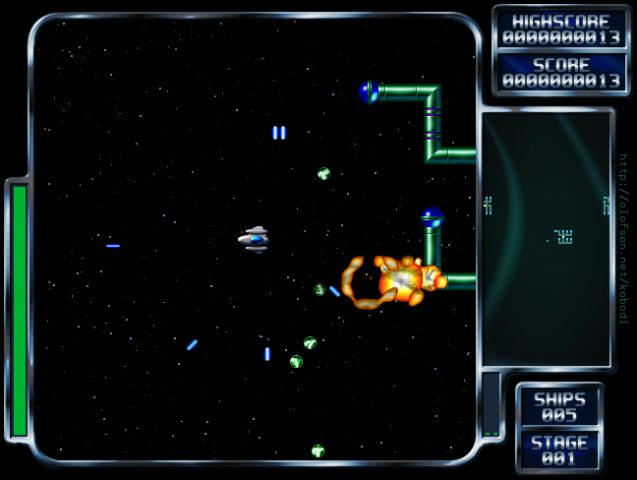