This is an action/puzzle game in which players guide small shapes and objects into corresponding slots. Players can sometimes use a hammer to clear 'cartoony' vampires, bats, and other creatures from a play area. During one level, players can skydive towards the earth and shoot tiny stars at biplanes and balloons, resulting in small explosions or clouds of smoke.

# 2012-07-02 10:20:44 - official description - esrb
The planet Roo was once a magical, happy place, powered by falling shapes known as Magical Meteors and populated by beings known as the Roogoo. Over time, some Roogoo began to abuse the powers of the Magical Meteors for greed and corruption, devastating the planet and plunging it into darkness. These fallen Roogoo are now known as the Meemoo. Your quest, as Roogoo, is to foil the Meemoo's activities of corruption and restore Planet Roo to its former glory.

Based on the critically-acclaimed Roogoo for Xbox Live Arcade, this game allows you to continue Roogoo's quest to ensure that the Magical Meteors can reach planet Roo and revive it with happiness and joy. But look out - the Meemoos will not let their energy source go without a fight!

Features:
* Use your Wii Remote™ and Nunchuk™ skills to complete levels
* 10 distinctive environments with 100+ levels
* Co-op campaign mode available throughout the entire game with alternating puzzle playing/fighting using tools such as hammers, nets and upgrades
* Up to 4 players, "Party Play" has multiple group minigames
* Introduces 8 + level bosses such as "The Giant Squid" who will throw and block your falling shapes in epic puzzle boss fights
* Connect the Wii™ version to Roogoo Attack for Nintendo DS™ to unlock additional levels in all 10 environments on both Wii™ and DS™ versions
* Entertaining short story segments
* Based on the critically-acclaimed XBLA game Roogoo 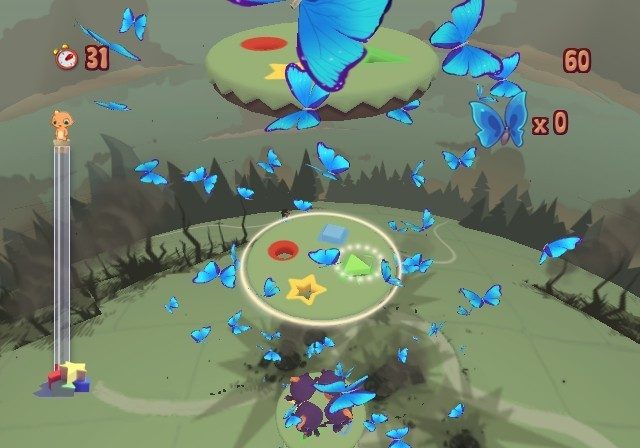