AmunJazz # 2014-07-16 20:45:55
The game left me feeling it was incomplete and that the main plot had a lot to be desired of. The side quests were however fairly entertaining and far better (and time consuming) than the main plot, giving this a bit of an impression on Elder Scrolls series which also thrives from side-quests rather than the main plot.

However, unlike most RPGs ever, player can actually fight and defeat end-game opponents fairly early on as combat is mainly based on player skill rather than numbers (attributes, statistics, etc.), though due to lacking numbers these will take a bit more time. Even the final boss is beatable with fairly low level character (maybe as low as 10) since it's not that dependent on player having any numerical advantages. Levels mainly making combat go faster because you deal more damage and makes mistakes more forgiving, but they don't really help you fight the enemy, since levels do not make you immune to shield breaks, enemy dodging, or cause you to dodge automatically.

Overall this is fairly enjoyable game, but loses most of its appeal once you have nothing else than the main plot to do (around chapter 2 or 3). The ending is also disappointing as it does not really solve the original issue at all. Variety of smaller bugs can make the game experience jarring and the jest spell not having any effect it is claimed to have (beyond making characters laugh) despite frequent claims that it does, does make the game feel rushed.

An epic story in an authentic world hand-crafted with an eye for detail and populated by "real", plausible characters. A Mysterious Volcanic Island The heavy tremors on the island bode ill for its inhabitants. Ancient temples have risen from the ground recently, bizarre creatures are terrorising the area. Fear and terror is spreading among the population. The End of All Hope? A group of powerful men who call themselves "The Inquisitors" have taken it upon them-selves to put an end to these events. They send an exhibition to this remote island, but a storm takes hold of the ship and destroys it at sea. A Hero Will Come - As if by a miracle, the player survives the shipwreck and is stranded on the volcanic island alone. He finds himself amidst a chaos of rebellion, tyranny and mystic rituals. He must now decide to which side the pendulum of fate will swing.

Very similar to Gothic series which was also by Piranha Bytes. 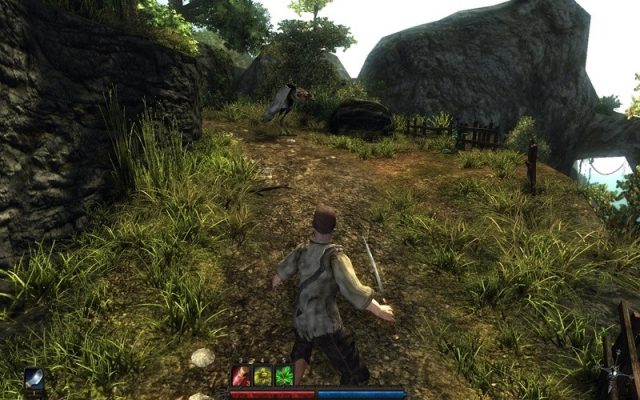