a.k.a. Legendary Warrior: Argos no Senshi / Argus no Senshi

Description of Game Play
"4.5 billion years have passed since earth's creation. Many dominators have ruled in all their glory. But time, their greatest enemy, ultimately defeated their reign. And now, a new dominator's reign begins ...
RYGAR' is a powerful warrior armed with a mighty weapon. 'RYGAR' can project his weapon in the direction he faces as well as swing it arching above his head. He must defeat all enemies, as well as destroy rock-head-stones" that appear from below ground. These rock "head-stones," when destroyed will leave bottles containing different potions, or stars or "T"'s that award more time Picking up the bottles and stars secretly brings out shields. These shields when picked up award new powers to 'RYGAR'. These powers include: extension of weapon reach; powerful overhead attack, ability to defeat multi-enemies within reach of weapon, indestructible for a certain time and ability to defeat enemy by trampling them. 'RYGAR' moves left or right, leaps high into the air and ducks down to a kneeling position. 'RYGAR' can "bounce" on his enemies to temporarily knock them out!! 'RYGAR' can leap up onto tree branches as well as onto rock formations. 'RYGAR' can also "climb" ropes to progress in the game play.

New Feature!!
TECMO has included an interesting, new feature that many game players have told us they want When a player "loses" a game life, the new "spare" 'RYGAR' warrior appears at exactly the point where the old one died. The player is not taken back to the beginning of each new round of play, causing an increasing "frustration factor" that will soon cause a player to walk away. 'RYGAR' has twenty-seven (27) rounds of play, unlike 6-10 rounds like many other games, so this feature will certainly be appreciated by your game customers. 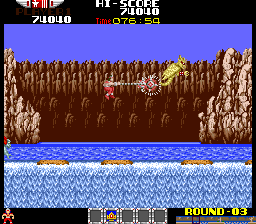