avatar was influenced by many other games, but especially dnd. However the many multiplayer aspects of the game make it unique. Released in 1979. Development for Avatar specifically, began in 1977 and has never ceased. The game is still be under development as "Vavatar". Its popularity is most likely due to the high level of interaction between users, both in and out of the game. avatar was letting players from all over the world interact in a gaming environment years before other MUDs MOOs MUSHes and MORPGs existed. As of 2006, it can be played on Cyber1 or the NovaNET

Any modern RPG player will feel at home looking at avatar's interface. Icons for monsters, stats, items equipped, worn or using. A graphical dungeon, text description and a chat area. Games are started by choosing race, gender, guild, weapons and abilities.
Several different terrains are encountered within a dungeon. Pitch black rooms (can't be lit), rotating rooms, magic inhibiting rooms, teleporting traps, water filled rooms (keep moving or drown), quicksand (don't fall in, don't drop anything). One of the best obstacles is illusionary walls. That is, not walls that aren't there, rather walls that look like something else, an empty hallway or a cove filled with gold. They are in fact hiding good things, bad things, or just the correct path. It is considered part of the gaming experience for a player to map these dangers themselves. If you become lost, trapped or otherwise die in the dungeon, you cannot do anything to remedy the situation. There are many ways to die, many traps that a player cannot escape, many monsters a player cannot defeat, many doors s/he cannot open, many pearls to which the player has no defense, there are tasks that a player cannot fulfill. This games design would be completely unfair if it weren't for the social aspect of the game. Sorcerer's cannot pick locks, Ninjas cannot heal, healers cannot wield swords. But all these classes together with a seeker will encounter few impossible tasks.
Parties are formed when a player "tracks" another. The tracked character is the leader and all trackers are along for the ride as for as long as they want. When entering an unexplored area, a player would be wise to join with someone who has mapped it. If you die, there's nothing you can do whatsoever. But other players and other parties can find and rescue you. Best tell people where you plan on going so they can find you later, and do not deviate from the plan, least you die there. Players must always be mindful, the more difficult the area they are incapacitated in, the less likely suitable rescuers will arrive. Going it alone is just crazy, but not forbidden. Note with this design, even a week and cowardly companion has value. If he runs from the battle and survives, he can report your last known location. This is just one reason experienced players want nubes in the party. The player interaction is unique in other ways as well. Quests are not created by the developers, rather players create quests for each other. For instance, a high level player feels ready to fight a dragon. He creates a quest for someone to find and report the location of a dragon. A lower level character would be fried for lunch if he attempted to fight a dragon. But if he merely finds a dragon, reports it to the 'quested' player, and sticks around for the victory, he helps fulfill a the players quest and receives experience and/or treasure. Questing is closely tied to guild membership.
Gold is used as a currency and can optionally be kept in banks.

There is no official player verses player. But if in the back of a party, a magic user can 'carelessly' damage the characters in front of them by not considering (or carefully considering) the range a spell, or lack thereof. Also, there are many perils one can be misled into. The only ways for one character to kill another are all indirect and devious. Needless to say, such behavior is rare and discouraged.

Controls:
The controls are based on the original PLATO system, which can be a bit confusing if you don't happen to have a PLATO keyboard. But fans of the early official AD&D series will recognize the style. a, w, d, x, steers your player with x being a 180. capital W continues even if there is an obstacle, such a door. A,D and X strafe while turning. f for fight, s for spells, 0 to open things. 1-9 are macros for whatever spell, scroll or potion they player chooses.


Ways to play it

version of
avatar (Internet Only) 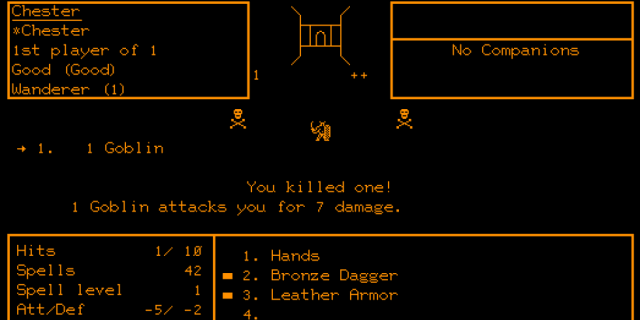