Crash Bandicoot Nitro Kart 3D is a fun racing game, where you need to run hard to win with our beloved Crash or with people you can choose during the game on different tracks.

The winners will be crowned "King of the kart for all eternity," and the losers will be banished from the island.

In addition to having 12 different tracks, the game has collected items on the track that can be played against opponents.

Join the inhabitants of N. Sanity Island and run as much as you can to fight for his place atop the podium.

The gameplay is very similar to Crash Team Racing, it is possible to use turbos, break boxes to pick up weapons and collect letters C, R, A, S and H 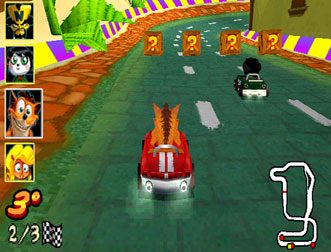