With Moero TwinBee Konami released an original game for the Famicom, not based on an arcade version. The game is similar to its predecessor, but instead of only vertical-scrolling top-down levels you will also fly through a couple of horizontally scrolling levels. The game didn't change its extra weapons upgrade system. You shoot bells, which lets them change their color and thus upgrade your ship. The levels and enemies are again really crazy and cartoony. Some enemies are even everyday items like shoes. The game plays really well and does not slow down. The difficulty level is on the easy side, so beginners will have their fun with it. 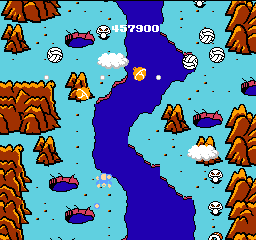