The Legend of Zelda: Ocarina of Time 3D

This is an adventure game in which players assume the role of Link, a young hero who must stop an evil king from obtaining a magical relic. Players explore dungeons and caves while using a sword, boomerang, slingshot, and magical spells to defeat a variety of fantastical enemies (e.g, dinosaurs, skeletons, giant spiders). Some ranged weapons also allow players to shoot projectiles (e.g., arrows) from a first-person view. Battles are accompanied by grunting sounds and colorful light effects; enemies blink and disappear when defeated. During one boss battle, Link jabs at a pig-like enemy, resulting in brief splashes of green liquid; a handful of other enemies emit similar effects when struck. As the game progresses, Link encounters a few female characters that are depicted from low camera angles and dressed in outfits that display moderate amounts of cleavage.

prequel of
The Legend of Zelda: Majora's Mask 3D (3DS) 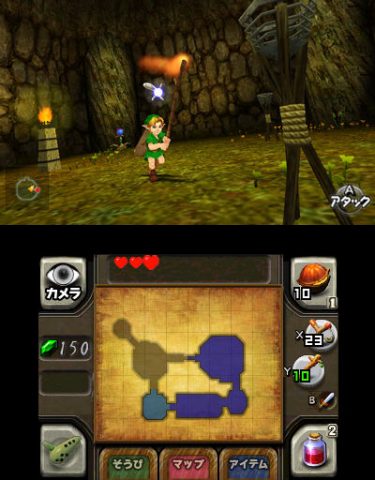 The Legend of Zelda: Ocarina of Time 3D in-game screen.