Take command of five Dwarf adventurers as they dive into long-abandoned mines to search for incredible wealth, lost treasures, dangerous monsters and bragging rights at the drinking hall. Be wary though, up to four teams set forth at once, and your greatest obstacle may be a fellow Dwarf with a different colored hat!

Delve Deeper is a Adventure/Strategy game which pits you against monsters as you and up to three rival teams build an ever-changing dungeon map and compete to pilfer its loot as quickly as possible.

Game Features:
* Endlessly re-playable, fast and furious dungeon adventure meets devious tile-placement puzzler to generate a unique experience each time.
* Up to four players per map, each with a fully customized team of Dwarfs, commanded by your best friends or your hated nemesis, the Rival Dwarf AI.
* Gorgeous 2D pixel art graphics, fully animated characters, critters and combat.
* Quirky humor, with 100 uniquely named Relics to collect, dozens of themed rival dwarf teams, and the ever-present King of Dwarfs commending your success, lambasting your failure, and awarding you with snarky titles at the end of each match.

It may be a bit vague how to start multiplayer game, but it requires either to have multiple controllers attached or taking turns selecting and configuring your teams. The latter works by player 1 selecting team and configuring its members and hitting ready, but before hitting in the middle for starting the game, second player chooses and configures their team, and repeat until all players have their teams. Only after all players have their team should the begin in the middle be clicked. This is unfortunately a bit vague as there are no clear prompts for it. 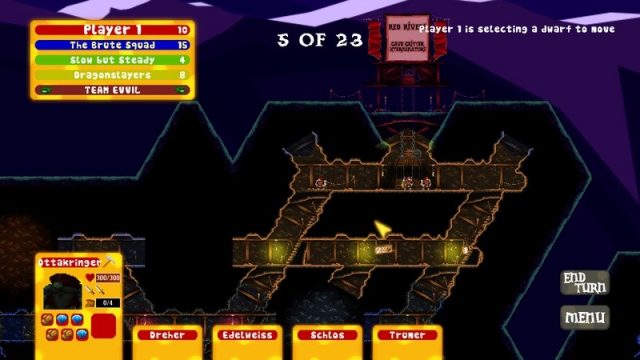