Inspired by chess, but adding combat that YOU control, Archon was the original Battle Chess. On the chessboard, when you challenge a piece, you are teleported into a Combat Arena where they fight in REAL-TIME until only the victor emerges to claim the square back on the checkered board. You must try to outmaneuver your opponent using teams of fantasy creatures or monsters in this epic struggle of Light and Dark. Conquer your opponent by defeating all of their pieces on the chess board or claim all the Power Squares for a quick victory! You can play Free-For-All mode, where it's everyone for themselves, or play using teams and gang up on your opponents pieces in battle (2 vs. 1.)

Archon:Classic can be played using USB controllers (the best way) or with keyboard and mouse. First developed in 1983, Archon quickly became a hit and instant classic because of it's unique combination of gameplay. We've recreated it to play just like the original, but we've added enhancements for today's gamer. So grab some friends and experience the classic game that started the Action/Strategy genre. It features:

* Up to 4 Player support...pure mayhem in battle!
* Play in "Free-for-All" or "Teams" mode
* USB controller support
* Optimized to run on netbooks
* 3 Different Boards (Modes) to play
* 4 AI settings
* Various spells to use
* 18 pieces per team, plus others you can summon
* Pieces gain experience and level up
* Primary and Secondary abilities
* Choose modern or classic icons
* Fully Featured 1 Player Campaign called, "Conquest"
* Conquest features 4 campaigns (over 60 quests)
* Over 16 hours gameplay on Conquest alone!
* Tracking and Statistics per game (fully featured)

The game's title is correctly written without space as "Archon:Classic", or it's an extremely common typo for the authors. 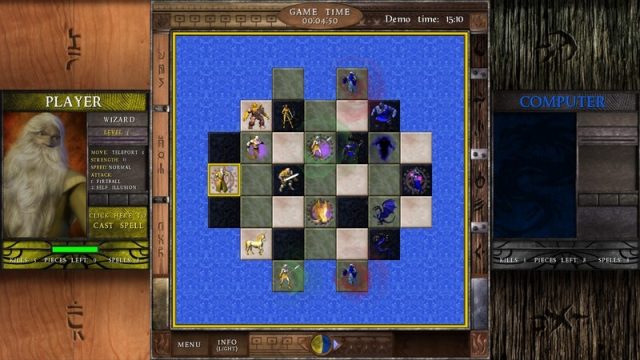