An overhead Action-RPG similar to the first Zelda game based on a manga/anime series. The bad controls and hit detection ruin the gameplay. Together with the weak graphics, you have a game that I put away earlier than I initially wanted.

teran01 # 2014-07-19 07:34:02
This game is probably not all that great or even bad. After this game was released, characters in manga series this game is based, as part of the story of an episode, were later offered the opportunity to provide a license for a Famicom game based on their lives. Comments by the character indicated that the resulting games was expected to be 'screwed up'. 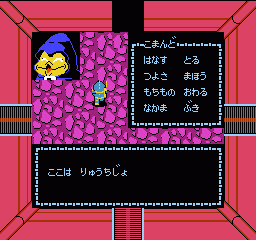