"Lost Word of Jenny" is based on the "Jenny" dolls toyline, a kind of Japanese "Barbie". In six levels you are collecting parts of a passcode to finish the game. Compared to Takara's first Famicom game Transformers: Convoy no Nazo , "Lost Word of Jenny" is an improvement, but not by much. The levels look different from each other and are connected by a city overworld scenario but have a very repetitive layout. The jumping controls are bad and its nearly impossible to land precise attacks. 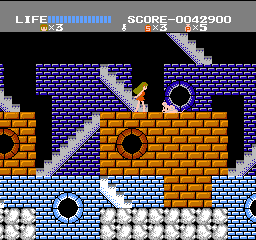