(The enrollment of new pilots)

The purpose of this document is to brief pilots arriving at this facility for their first tour of duty.

The most disturbing aspect of this conflict is that we do not know our enemy. We do not know their reasons for attacking us. We do not know who they are. However, we do know that their home is in the planets of the star Sirius and we do know what they look like.
They look like this..
The individual creatures are very similar in form to terrestrial insects although they are larger and somewhat heavier. When the corpses of these creatures were found they were named "Roaches". This name has stuck.
The rest of the "information" we have on them is mainly conjecture. We summarise this:
It has been theorised that these creatures and terrestrial insects may share a common ancestor. Their form was a direct consequence of the unpleasant conditions upon the Sirian planet on which they evolved. Their physical form impaired their ability to develop and use technology.
If this had not been the case, the whole Galaxy would probably be over-run by these insects. The Sirian Creatures are ancient by terrestrial standards. There is reason to suspect that the present evolutionary form of these creatures
was achieved while dinosaurs were the highest form of life on Earth. Like terrestrial insects - as individuals each creature is quite stupid and powerless. They act as large communities directed by queens.
However, unlike terrestrial insects, they do not communicate using chemical scents and tastes. The bodies of "roaches" contain metallic particles which act as organic radio transmitters and receivers. In other words, these insects are naturally telepathic. It is this ability which not only allows them to communicate but to combine their limited intellect to form a group-mind.
They have a shared consciousness.
Groups of tens, or even hundreds of insects are needed before any true intelligent behaviour is demonstrated. It can be argued that the entire Sirian-League is a single vast creature - rather than a collection of individuals.
It appears that any form of manufactured technology at all is relatively new to these insectoids. We suspect that their ability to manufacture space-vessels is limited. We do not know what prompted these creatures to set about their conquest of space - we merely had to face the terrible consequences of that decision when thy set forth from their home planet....
The very first Sirian vessel was launched from Sirius-Five in the year 1897. In the time that has passed since then, they must have made a thorough search of the many star-systems in this galactic arm. It is inconceivable that they did not visit the Earth in that time.

In the year 2045 they chose to re-visit the our planet . A vast space-fleet armed with horrendous weapons came screaming out of the void to attack an unsuspecting Earth.
Over a million tonnes of weapons were deployed. The Earth was devastated. Planetary winter conditions ensued. In the attack itself over 3 billion people lost their lives. In the following years, more than a third of the population of the Earth died as a direct consequence of the conflict.
We suspect that the motive behind that attack was to reduce the peoples of the Earth to a state of barbarism. Clearly the insects underestimated our powers of recovery - otherwise they would be back. We expect that some day they will return to finish the job they started some 12 years ago.

The history of the past twelve years has been remarkable. The complete dissolution of all national divisions occurred. The organisation:Fist-of-Earth formed a wartime world government of remarkable efficiency.
As well as starting to restore the devastated planet - the Fist of Earth world government set about forming a defensive force which can protect the Earth from further attacks. The spearhead of this defensive policy was the construction of Solbase in Earth orbit.

This Space-Fortress is now the centre of the New Defensive Initiative. It is a vital part in the attempts of Mankind to protect itself. After Solbase became operational - it was towed into Sun-orbit. An orbit which was felt to offer maximum defensive potential about the poles of the solar system. Supply ships from Earth keep the base stocked with parts ,crew and supplies.
The base is in the form of a cross. It rotates to provide centrifugal gravity. The central hub offers docking facilities for incoming craft. An elevator can move a ship from the hub "downwards" to the launch bay.
Ships in the launch bay are "dropped" out of their cradle into space. The three other arms of Solbase house the accommodation modules and command headquarters. Quadspace micro-relays can be launched from Solbase to get messages to any vessel in the local group in a matter of seconds.
We intend to turn the tables. We intend to protect ourselves by fighting back. At last we have a weapon: The FOE-57 spacecraft.

The FOE-57 is the first workable interstellar fighter. Using a quad-space motor. The ship can propel and rotate itself through the higher dimensions. Using this technology the ship can rapidly reach any point in the local group of stars. The FOE-57 can also carry a massive weapons payload which it can deploy rapidly and accurately. It is this vessel which you will be pilotting against the forces of the Sirian league.
The safety of the peoples of Earth rests in your hands.
End-of-text. 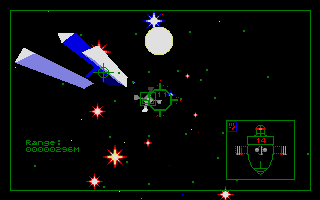