Rather than simply watching real athletes compete for Winter Olympic glory on the world stage, you too can go for the gold on your Game Boy Advance. Compete in six real events from the Salt Lake City 2002 Games, including Snowboard Parallel Giant Slalom, Ski Jumping K120 Individual, and Two-Man Bobsled. The game features Olympic, tournament, classic, and time-trial modes, plus a single-elimination tournament for up to four players. 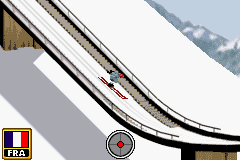