Batsu & Terry is based on an 80's baseball-themed manga series. You control either a baseball throwing guy or a baseball bat swinging guy. The game doesn't offer much fun. The levels are full of re-occuring elements and mostly just boring. Most enemies you should just avoid instead of killing them. And the graphics and sound are by far not good enough to draw some positive attention to the game. I mean I have played much worse games on the Famicom/NES, but in the end "Batsu & Terry" struggles to be even a mediocre game. 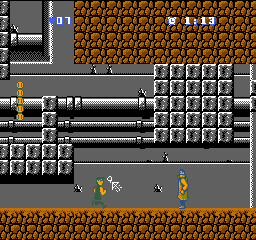