The Secret of Monkey Island

The first 256-color LucasArts adventure game, and the beginning of their popular Monkey Island series. Join underappreciated hero Guybrush Threepwood on his quest to become the most fearsome pirate in the Caribbean! The game features charming, clever puzzles and hilarious writing.

was remade as
The Secret of Monkey Island: Special Edition (Windows) 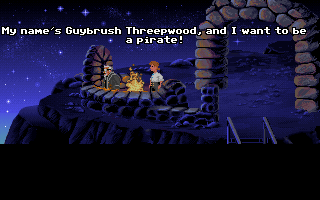